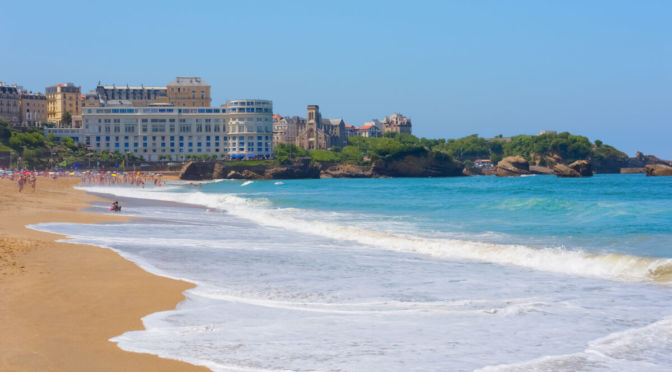 Are you wondering what is the best place to stay in Basque Country, Biarritz or Saint Jean de Luz?

This is one of the questions my readers regularly ask me, even though the two cities are very close geographically.

Then read this article, where I answer it, depending on the purpose of your trip, the period and your tastes!

Stay in Saint Jean de Luz to optimize your moves.

Saint Jean de Luz is also a quicker way to get to La Rhune for a hike or the cogwheel train.

If you want to stock up on meat, cigarettes, alcohol and gasoline in Spain, Saint Jean de Luz is also ideal as Spain is cheaper for these goods.

You will also be able to get to the villages of Aïnhoa, Sare and the witches’ village of Zugarramurdi more quickly, and be closer to the mountains for hiking.

Saint Jean de Luz if you come by train.

Unlike Biarritz station, which is located off-center in the Negresse district, the Saint Jean de Luz station is in the center of the city.

The port is right next door, the pedestrian streets too, the waterfront less than 5 minutes walk away.

The platforms of the station also benefit from a superb view of the Rhune.

The station has an Avis office. If you want to rent a car, you can pick it up directly from the train.

There is no more auto-train service between Paris and Biarritz (abolished since 2017).

Biarritz if you arrive by plane.

The airport for the Northern Basque Country is located in the municipalities of Anglet and Biarritz.

The airport of Biarritz Pays Basque is obviously not in the city center but it is nevertheless located in the city, at approximately 2kms from the train station.

You can rent a car there.

Saint Jean de Luz if you want to move only on foot and by public transport.

The train station in Saint Jean de Luz is more convenient than the airport in Biarritz, since you can go directly to your pre-booked hotel in the center.

The bus station is located in front of the station and you can also take the train to go to Bayonne, Hendaye, or even Pasaia and San Sebastian by taking the Euskotren – nicknamed Topo – to the right on the square when leaving the station of Hendaye.

Saint Jean de Luz if you want to go to Spain several times.

I have already talked about it above for the optimization of the travels: Saint Jean de Luz is the ideal base to go to Spain.

Both for walks along the waterfront.

Biarritz and Saint Jean de Luz both benefit from an exceptional seafront, with magnificent views of the coast, the Pyrenees and Spain.

In Biarritz, you can walk from the lighthouse to the beach of the Côte des Basques, passing by the Grande Plage, the fishermen’s port, Port-Vieux and the Rocher de la Vierge.

The beach of La Milady – and its neighbor Ilbarritz – is also worth a visit. From the center, you will have to go there by car or by bus.

In Saint Jean de Luz, the waterfront in the center is smaller but more authentic. You can easily walk to the other side of the harbor, to Ciboure, to the Fort of Socoa and to the road of the Corniche.

The most beautiful part of the Basque coastline on the French side is the route de la Corniche.

Although now closed to hiking on this part of the coastal path, you can drive along it, between flysch cliffs plunging into the ocean on one side and the Pyrenees on the other. Don’t hesitate to park your car in the parking lots provided to enjoy the view and take pictures.

Do not venture on the old coastal path: the cliff is collapsing and that is why this part of the path is now closed.

Both for the sunsets.

In Biarritz, my favorite place to enjoy the sunset is the Rocher du Basta.

In Saint Jean de Luz, it is the road of the Corniche.

Both for the views of the Pyrenees.

We can see the Rhune better from Saint Jean de Luz, but the 3 Crowns are more visible and photogenic from Biarritz.

Biarritz or St Jean de Luz for swimming with children ?

The bay is well protected by two dikes, that of Artha and that of the Fort of Socoa.

It makes the ocean calmer than in Biarritz.

Did you know that surfing was first introduced in France in Biarritz? On the beach of the Côte des Basques to be exact.

To support Biarritz Olympique, it is of course Biarritz… for the moment…

If you are interested in the Cesta Punta, the Internationals of this sport take place every year during the summer in Saint Jean de Luz.

Both cities and their surroundings offer several beautiful golf courses.

Biarritz for the nightlife.

Due to its history and development, Saint Jean de Luz has remained anchored in the Basque culture, much more than the heteroclite Biarritz.

The city has many culinary specialties: the chipiron à la Luzienne, the Adam macaroon (created for the wedding of Louis XIV), the ttoro (kind of fish soup).

The best ttoro is eaten at “Chez Mattin” in Ciboure.

The city being a tuna and sardine port, these two fish are used in many preparations and have their annual festival.

In Saint Jean de Luz, there is the church of Saint Jean-Baptiste, in which Louis XIV was married.

The Sainte-Eugénie church in Biarritz, although very pretty, does not have a gallery. The same goes for the very beautiful Imperial Chapel of Biarritz or the Russian Orthodox Church, of Russian style as its name indicates!

Biarritz has several interesting museums, such as the Asiatica Museum, my favorite museum in the area.

Every year at Christmas time, Biarritz highlights its most beautiful monuments during Biarritz en lumière, a magnificent sound and light show.

Depending on the dates of your stay, you can also go to Irun for its famous alarde (military parade in Napoleonic dress).

Biarritz for a stay in a palace.

The Villa Eugenie, originally built by Napoleon III for Empress Eugenie, and rebuilt after the fire that ravaged it, is now one of the few French palaces: the Hotel du Palais.

Both for the references to the history of France.

Both cities have a rich historical past, both related to their maritime facade – whalers in Biarritz, privateers in Saint Jean de Luz – and to their place in French history.

Saint Jean de Luz for the fans of Louis XIV.

King Louis XIV was married in the church of Saint Jean-Baptiste in Saint Jean de Luz.

Biarritz for fans of Napoleon III.

Before Napoleon III built the Villa Eugenie for his wife, Biarritz was essentially a small village of fishermen and farmers, where the practice of therapeutic sea bathing had begun.

With the construction of the Villa Eugenie, many great people of the kingdom and neighboring kingdoms decided to build their own private mansion in Biarritz. This explains the heterogeneous nature of the architecture in Biarritz.

With these tips, you should now know the best place to stay in Basque Country, Biarritz or Saint Jean de Luz, according to your needs and tastes.

Have you ever visited the Basque Country and what is your favorite Basque city? Tell us all about it in comments!

What is the Best Place to Stay in Basque Country?