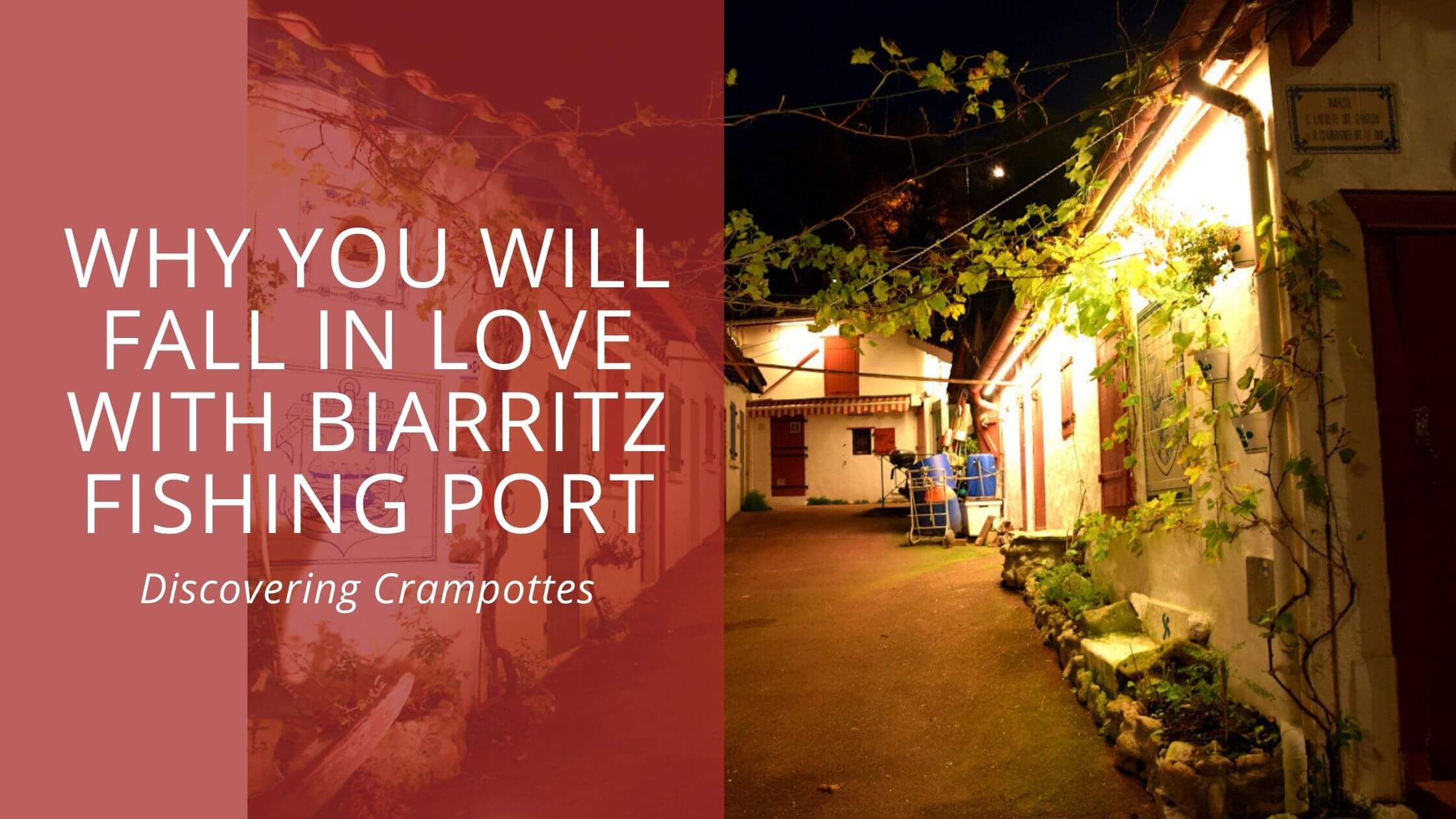 The picturesque “Port des pêcheurs” in Biarritz is one of my favorite places to stroll in the Basque Country.

The atmosphere of Biarritz port is calm and charming. It is away from the traffic and the bustle of the beaches. And it even feels like a small village in Italy or Greece.

In this article, you will discover:

Frequently asked questions about the fishermen’s port of Biarritz.

Yes, a disabled parking space is reserved in the fishermen’s harbor. However, this parking lot is not easily accessible by car.

Where can I park near the fishermen’s port?

There are many paying parking lots near the port, such as the one at the church of Sainte Eugénie.

Is the visit free and unrestricted?

Can I get to the port by bus?

Where is Biarritz port?

It is located in the center of Biarritz, between the Rocher du Basta (the rock in front of the crêperie Le Blé Noir, on the right on the map) and the Rocher de la Vierge (on the left off the map).

It is overlooked by the Sainte-Eugénie church on one side and the Plateau de l’Atalaye on the other.

The fishermen’s port should not be confused with Port-Vieux, a cove located between the Rocher de la Vierge and Villa Belza.

How to reach the Port of Biarritz ?

Park in one of the many paid parking lots around the port, or Parking Floquet – free – if you don’t mind walking.

By bus or Tram bus.

There are several stops near the port: Port-Vieux, Gambetta, Elianthe.

Consult the Chronoplus website to know the schedule of your line.

Whatever your mode of transportation to get to the center of Biarritz, you will have to walk to the port anyway.

Personally, I like to go down the stairs leading to the Rocher du Basta and go up to the rock to admire the view of the port, Sainte Eugénie, the Grande Plage beach and the lighthouse. I then walk along the beach on the footpath to get to the port. I go up by the path at the end, via the Atalaye plateau, to go to the Rocher de la Vierge. On the way back, I usually take the road tunnel and the road along the Sainte Eugénie church.

You can also use the staircase access on the road.

The history of the fishermen’s port.

The fishermen came to settle here around 1780, after a big storm made Port Vieux unusable. It is in Port Vieux, and not on the beach of the fishermen’s port as some sites mistakenly say, that the whales were butchered. This is why a separate article will be devoted to the Atalaye plateau and to Port-Vieux, whose history is very closely linked.

It was a paved slipway with a few shacks around it, from which a more coastal fishery was conducted, for sardines and mackerel. The whales having fled to Newfoundland, Canada, the fishermen who remained had no choice but to adapt to a new fishery.

A customs house already existed in 1840, but it was not until around 1860 that the port was built. It is notably at this time that the platform of the port is built, where the cement blocks allowing the development of the port of refuge will be glued. The port was originally planned by Napoleon III at the Rocher de la Vierge, but was never built because of the successive storms that destroyed the structure.

Little by little, fisheries were set up there. The very first one, the Silhouette fishery, requested permission to build an oyster basin. It was built by the family on the site of the current “bassin à flots” (the first basin when a boat enters the port).

The cliff under the Place Sainte-Eugénie was not retained as it is now and its landslide arrived in the oyster basin. Mr. Silhouette therefore asked that a wharf be built, which would be done with the help of the fishermen.

The other basins were built at the end of the 19th century.

As the Silhouette fishery developed, it installed steamboats in the port. It was therefore necessary to install a water fountain, partly financed by the fishermen.

At the beginning of the 20th century, there were 300 professional fishermen in the port. But with the First World War, many fishermen were enlisted in the army. Those who remained were old, which caused the decline of the fishery. Today, there are only about thirty amateurs left who sail every day.

The word “crampotte” would mean “little night”. It was the short night of the fisherman who slept in his crampotte rather than going home after sardine fishing.

The crampottes are these small white huts with colored shutters and doors, leaning against the cliff to hold it.

They are only used to store fishing equipment and as a place for aperitif snacks. It is forbidden to live there.

They were built on the maritime domain and belong to the city.

When the port declined after the war and its activity became more touristy, new crampottes were built for tourism and for use as restaurants.

The rules are now strict to benefit from a crampotte: you must live in Biarritz, pay your taxes in Biarritz and have a mooring in the port. The waiting period is about 20 years and the annual rent is about 400€. About 50 people are currently on the waiting list and there is no “right of inheritance”.

There are 59 of them for 94 anchorages and the Coastal Law prohibits the construction of new ones.

A village in the city.

The locals consider the Fishermen’s Port as a village within a village.

They are proud of its history and a tradition of solidarity and conviviality between the tenants is transmitted from generation to generation. Here, it is not uncommon to get a boat license before a car license!

The port was declared a free commune on June 7, 1981 by a group of fishermen friends, including Jean Dornaletche, the last professional fisherman, elected mayor for life. On this occasion, squares and alleys were renamed.

When to visit the port and why?

The atmosphere of the port is more pleasant out of season, when it is not invaded by tourists.

You can come there by day or night. Especially in the fall, it is pleasant to stroll between the Grande Plage and the Côte des Basques in the middle of the afternoon, to enjoy the views of the lighthouse, the Rocher du Basta and Sainte-Eugénie, to admire the sunset over the Pyrenees from the Rocher de la Vierge, and then to enjoy the harbor at nightfall. After strolling around the crampottes for a while, you can enjoy one or two pintxos with a glass of local wine at the crampotte 30, before eating sardines at the Casa Juan Pedro.

Photos of Biarritz by night and best places to photograph the port.

The best places to photograph the harbor and crampottes are:

From the harbor, you can take beautiful pictures of the lighthouse of Biarritz and the Sainte-Eugénie church.

Where to eat in the Biarritz Port ?

To stick as closely as possible to the local tradition, start with one or two pintxos – Basque tapas – with an aperitif at crampotte 30, then head for Casa Juan Pedro.

Now run by twin brothers, it was opened by the father in the early 80s. The twins were already helping their father in what was only a small restaurant, with a small plancha, cardboard plates and where one ate with the fingers sardines, gambas and squids.

Video on the harbour Crampottes.

See How I Can Help You Organize Your Tour

Help with the preparation of the tour

Connection with my local contacts

Guiding your group in French or English

Through the history of the place, my photos and explanations, I hope to have convinced you to visit the picturesque Biarritz Port or Port des Pêcheurs of Biarritz.

While writing this article, I realized that too little time was devoted to the commented visit of Biarritz, and especially to its history, when we guide groups for the local vacation villages. We usually only do a “panoramic” tour by bus from the lighthouse to the Rocher de la Vierge, with a photo stop at the lighthouse and then a commented stop and free time at the Rocher de la Vierge.

Biarritz, its history and its entire seafront deserve in my opinion more than a quick visit…

Have you already visited Biarritz and its fishing port? Do you have any questions ? Don’t hesitate to share them with us in comments.

For the complete article on Biarritz, it’s here